The Rotten Smell of Teen Spirit
by Tommy Dean

Faith stands in line, having exited the school building for the monthly fire drill. Kids whisper around her, their voices rising with the wind. Their voices make her anxious. Not because she imagines them talking about her, but because she can’t connect with their conversations. The dating, the kissing, the badly acted dramas of television. Even outside, she’s an outsider. It’s March, cold, but with the promise of the sunshine to come, clouds sitting on the kid’s shoulders. V-necks and tank-tops sprouting like early perennials, the purple flowers that last for a week, that remind her mother of her brother’s death, a drunken car accident that no one talks about, happening weeks before Faith was born. Christmas presents never delivered, projectiled out of the back of the truck as the tree sawed it in half.

The waiting becomes uneasy, boys wrestling in the dew-slippery grass, teachers huddled together like birds on a telephone pole wire, refusing to yell at another kid. Faith is chilled, her arms goose-bumped. Michael Chase, a shadow behind her, smiling, nodding, scuffing his feet in the weeds next to the fence separating them from the football field. He comes to their farm sometimes; helps with the hay. Fifteen, but he can drive the tractor, a son their father wants, a boy Faith wants to hug, to explore the dark places of the woods with, her heart.

There was a moment in the barn. This summer. His hands below the button of her jeans. Her head against his chest. Dust motes and sour hay, her father’s boots raking across the gravel drive. Then nothing. No calls, no rumors, nothing but the hot press of her imagination.

“Give me your jacket,” Faith says. Hands on her hips, long sleeved shirt and high waisted jeans giving nothing away. Let the other girls be proud of their skin.

Fuck it, she thinks, the word a rally, as she slips down the hill, a slide like the feeling of being on roller skates for the first time, hands grasping for something other than air. Michael catches her, a lock of hair crowding his eyes, his friends already laughing, saying crude things. Chase is like a freaking magician, making girls appear out of thin air. Make sure she says yes, Michael.

“Give me your jacket,” Faith says. Hands on her hips, long sleeved shirt and high waisted jeans giving nothing away. Let the other girls be proud of their skin.

“Sure,” he says, one sleeve already unholstered from his arm. If Faith knew it would be this easy, she would have asked several minutes ago. Maybe there really was a fire?

At least make her beg for it.

Michael stuffs his arm back in the sleeve, his smile gone, a hard jut to his chin. “Give us a smile.”

Faith’s foot is already kicking, the space between them an easy obstacle, her shoe colliding with the crotch of his jeans. The oohs and ahhs erupting from the lines of teenagers as if they were all waiting for a spectacle.

And Chase goes down!

Faith is already climbing the hill, girls leaning in, boys leaning out, teachers’ heads swiveling, looking for danger, arms ready to flap toward the outbreak. She ignores their chatter, the access road a bridge away from her gathering infamy. The door opening with the principal’s bald head sweating, his arm and the pit stains on his button-down shirt a limbo pole she ducks underneath daring them all to catch up with her, as the fire sirens get nearer.

Shit, not again, the principal says, as the crowd swarms, their voices looping together like canned laughter on a sitcom.

Inside the door, the window partially fogged, they remind her of the chickens, squawking and flapping, but not making any sense. An alarm that no one can interpret, especially her. 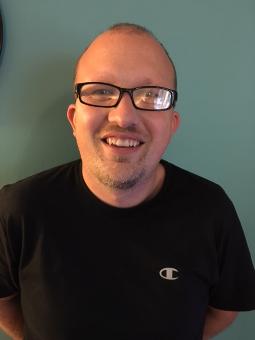 Tommy Dean lives in Indiana with his wife and two children. He is the author of the flash fiction chapbook Special Like the People on TV (Redbird Chapbooks, 2014) and Covenants (ELJ Editions, 2021). He is the Editor at Fractured Lit. He has been previously published in Bending Genres, Atticus Review, The Lascaux Review, New World Writing, Pithead Chapel, and New Flash Fiction Review. His story “You’ve Stopped” was included in Best Microfiction 2019 and 2020 and Best Small Fiction 2019. He won the 2019 Lascaux Prize in Short Fiction. His interviews have been previously published in New Flash Fiction Review, The Rumpus, and CRAFT Literary. He has led writing workshops for the Barrelhouse  Conversations and Connections conference, The Lafayette Writer’s Workshop, Bending Genres, and for the Gotham Writers Workshop. Find him @TommyDeanWriter.