Ode to Chiggers
by Jennifer McGaha

Despite the early hour, the air was already humid, and days of rain had left the bank slippery with rotting weeds and leaves. Still, it was the perfect time for berry picking, just after the fruit turned deep purply-blue and before the crows cleaned out the vines. As I paused at the top of the hill, gnats swarmed my face, and a line of sweat trickled down my bra. Wearing jeans, a T-shirt under a long-sleeved flannel shirt buttoned tightly at the throat and wrists, knee socks, knee-high muck boots, a neck buff and a wide-brimmed hat, I was decidedly overdressed, but berry picking here was not for the faint of heart.

Since my husband and I had moved to this wooded hollow almost seven years before, the dozen or so bushes had grown gangly and unruly, full of awkward, spindly limbs and infested with all stripes of flying, biting creatures. The bushes were not wild, but they weren’t exactly tame either. Planted decades earlier, they were aligned in front of a handful of blackberry bushes and near the foundation of an old barn, and though I had never pruned them or weeded them or given them a dose of whatever you gave blueberry bushes to encourage growth, I had come to think of them as mine, as my compensation for living in a century-old cabin with a leaky roof and more than its share of venomous snakes and fist-sized spiders. In the world outside of this wooded bubble that had slowly begun to feel like mine, all manner of chaos reigned—a raging pandemic, a country imploding under the guise of greatness—but here, a mile away from the mailbox, two miles from the main road, the world fell away from me or I from it. I was Violet Beauregarde in Willy Wonka’s chocolate factory, Laura and Lizzie in Rossetti's “Goblin Market,” Maggie Nelson in Bluets - consumed with blue.

Working my way into the thicket, I checked the ground for roots, branches, and, especially, the tell-tale signs of copperheads: thick, hourglass-patterned bodies, flat, triangular heads. I had never seen a copperhead in this exact spot, but we had seen many around our house, and it was enough to know that they could be here, that the conditions were right. I picked carefully, moving in concentric circles, parting branches and dropping ripe fruit into the metal mixing bowl I carried in one hand. High in the pines, a murder of crows complained, my presence an intrusion on their breakfast buffet. In the field below, hens scratched in the dirt, and ten goats, two bucks in one, three does and their offspring in the other, wandered from the two adjacent barns to wait under the overhang for the dewy grass to dry.

The bucks were past their prime, their seasons of ravenous mating behind them, but they nonetheless bellowed robustly across the pasture to their one-time lovers—two caprine catcallers. Once, my body, too, had burned with a fierce, spiky heat. Once, when I was young, I had leapt from a second story ledge to meet my lover by the side of a moonlit road where he sat, car idling, windows rolled down, Lynyrd Skynyrd blaring from the tape deck. Once, I did lines on a floor-length mirror with a wannabe hippy I almost loved. Once, I absconded to the Midwest to live in a box car next to an abandoned house where wild foxes roamed. Once, I swam in a thermal pool by an island in the middle of the Atlantic Ocean, smeared butter over a cob of volcano-cooked corn, caressed hot, black sand with my bare toes. Next to a lake in Waterton, Canada, I pet a wild deer. I ate butter-drenched, garlicky eels in Barcelona, drank thick, dark chocolate at Angelina’s in Paris, soared on a zipline over an Appalachian forest.

Still, just when I thought it might be gone for good, here in the berry patch, I hungered for a new sensation, something to pierce through the ordinariness of my life and remind me that I was still among the living.

These may not seem like daring things, yet, for me, they had been, or at least I had once believed them to be. Now, my life had become a series of tamped down cravings, my indulgences whittled down to a manageable few—punk-purple hair dye, a second glass of Chardonnay, an afternoon spent binge-watching Schitt’s Creek. And what did I expect at my age anyway? Once, when I was in fourth grade, I had a teacher who corrected her students for using the word “starving” on the grounds that the word was overkill, too big a word for a gentle gnawing in the guts that signaled it was time for lunch or a snack, too flippant in light of all those people around the world who were actually starving. After all, what did a bunch of nine-year-olds know about hunger, about desire of any kind, really? And what did I know of it now, all these years later, after a lifetime spent yearning for something always just beyond my reach? Still, just when I thought it might be gone for good, here in the berry patch, I hungered for a new sensation, something to pierce through the ordinariness of my life and remind me that I was still among the living.

But, of course, there was always a price to pay, and here in the blueberry thicket, the cost for an extravaganza of blueberry delights was steep: a good, strong dose of chiggers. Chiggers were stealthy, vile, microscopic, spider-like creatures. When you were least expecting it, they burrowed in the warmest parts of your body—under your arms, behind your knees, under your breasts, between your legs. The larvae bore holes in your skin, then feasted on the cells inside. According to an old wives’ tale, a thin layer of clear nail polish applied to the welts smothered the mites inside, but, actually, by the time you noticed the itching, the bugs had actually already fallen off, their feeding frenzy over, the satiated larvae well on their way to maturity. You could mitigate the damage, batten the hatches, brace for the long, sleepless night ahead, but once the chiggers had had a go at you, there wasn’t much you could do.

Still. I wanted what I wanted: jam, pancakes, syrup, smoothies, cobblers, cakes, muffins, compotes, tarts. And so, I pushed aside thoughts of the ethereal, shadowy images that had appeared on my screen earlier when I had Googled “chiggers” and instead focused on the gurgling of the creek in the distance, on the gentle crooning of mother goats. By the time the sun had risen over the pasture, and the goats had ventured into the tall grass, I had stripped the lower branches of berries, but clusters hung high in one of the bushes, just beyond my grasp. I tried reaching the fruit from different angles—from the side, from underneath, from the steepest part of the bank—to no avail. Finally, I jumped, grabbed the limb, pulled it down, and pinned it beneath one arm. Spiders and inch worms poured onto my shirt. I shook them off and wedged the limb deeper into my armpit, freeing one hand to pick the berries that now dangled chest-high in front of me.

Later that night, when I woke frantically clawing the welts between my legs, in my armpits, on the nipple of my right breast, I would wonder if this was the moment when the chiggers had scuttled down the neck of my shirt and into my bra, into the warm waistband of my jeans. The itching would not be pain, exactly, more a cousin of pain—fierce and nauseating—and I would vow once again to be more careful next time, more prudent. But in the berry patch, I was emboldened, careless, maybe even carefree (“Be childlike, not childish,” my hippy lover once told me), and I picked and picked and picked until my fingers were blue, my hair damp and frizzy, until visions of blueberry pancakes drenched in blueberry syrup oozed over me, leaving only the hot, thick stillness of this place. 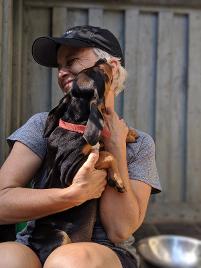 Jennifer McGaha is the author of Flat Broke with Two Goats, a memoir, and the forthcoming essay collection, Bushwhacking. Her work has also appeared in The Bitter Southerner, Brevity, CHEAP POP, The Huffington Post, The New Pioneer, Lumina, PANK, The Chronicle of Higher Education, Baltimore Fishbowl, and many other publications. Jennifer lives in the western North Carolina mountains with her husband and their six dogs, ten dairy goats, and ever-changing number of laying hens.