Pets had no place on the farm in East Flat Rock, North Carolina where my mother was raised, save for a couple of barn cats. Assuming they steered clear of the tractor and combine, the barn cats did nothing but chase mice. By the time my sister, Melissa, and I came along, we lived in town. But since our mom couldn’t fathom an animal in the house, our cats stayed outdoors. This meant loss after loss. Calico, Tiger, Bear, Smokey, Midnight. Runaways, middle-of-the-night attacks from who knew what, car accidents.

We dug holes with pink shovels in our mother’s hosta beds and waited for our dad to get home from work. Though he told us not to look, I peeked through my fingers. I had a View-Master then, a plastic toy that showed different scenes, images of beaches and castles, woods and rainbows. Soon as I caught a glimpse of matted fur and dried blood, I imagined clicking a button to replace the image with a new one.

When our mother got leukemia, I was sixteen and Melissa was thirteen. For as long as I’d known her, Mom seemed in constant motion—sewing gingham shorts and poplin tops for our summer clothes, organizing the doctor’s office where she worked, weeding, gathering pinecones to make wreaths, and stringing beans. Now she stayed in her floral robe all day, a sight I could hardly bear.

In the back yard, where I went to escape, one of the cats might saunter up and flick her tail against my leg. Only in retrospect do I wish for more, the chance to scoop up a squirming bundle of fur without fear of getting scratched. Back then I let the cat prance away, the memory of her brief touch still tickling my calf.

Even when our parents spent months at the hospital in Winston-Salem, some two-and-a half hours away, Melissa and I insisted that we didn’t need to stay with grandparents. We could take care of ourselves.

Most days after school our grandmother came over to fix supper. Nanny Ward made fried chicken or pork chops, green beans and potatoes from her garden. I clicked past the memory of my mother at the stove stirring a pot of spaghetti sauce. The cats—we usually had a couple at any given time—either came home for supper or they didn’t.

Barely a year after her diagnosis, my mother passed away. For a few minutes I knew and Melissa didn’t. I wished that my knowledge might shield her, that somehow I’d taken the one spot at the view finder. Hours after I told her, after my mother’s sisters had arrived, I darted outside, letting the screen door slap shut behind me. There ought to be a word, something bigger than lonely, for a young girl wandering around in the hazy gloaming of a spring evening rattling cat food in an old pie pan.

“Kitty, here kitty, kitty,” I called out again and again.

When I became a mother myself, we didn’t have any pets. Around age ten, my son started begging for a dog. For a time I resisted. My husband, Geoff, and I worked unpredictable hours as lawyers. Our yard in Raleigh seemed no bigger than a postage stamp.

“What would a dog do in the house all day?” I asked Geoff. I pictured muddy paw prints on the couch, mangled drapes, a ruined pantry.

“Sleep, mostly,” he said with a shrug.

Since he’d been raised with dogs, I worked myself up to believing him. We rescued a Yorkie, fully grown and unusually big at eleven pounds, and named him Blue after my husband’s childhood teddy bear. Best I could tell, Blue did sleep all day. Soon as we got home from work, he trotted over with a squeaky toy in his mouth. On walks he sniffed at spent camellia blooms and dug in fallen pine needles. Ever protective, he lunged and growled at Rottweilers and German shepherds, sometimes at people carrying crinkly grocery bags. When we talked to him, he tilted his head in rapt attention.

They’d come back smelling of rain-soaked leaves. Inside the house Blue turned in a circle or two and settled down by the rock fireplace with his chin on his paws. While he snored, I’d stay up late with my dad.

I wish I could remember the first time we took Blue to my hometown. Our dad had remarried by then. He and our stepmother, Melody, lived on twenty-some acres in Mills River, plenty of space for roaming. Try as I might, I don’t recall how Blue first reacted to the honeyed mountain air, the velvety thickets of rhododendron. What springs to mind is how, whenever we visited, Dad took Blue for walks. Despite all that space, the unfettered freedom, I played the part of protective mom.

“Keep him on his leash,” I reminded him as my dad waved over his shoulder, Blue jumping at his side.

“There’s fudge in the refrigerator,” Dad would call out. “And get you some of that cake Melody made.”

They’d come back smelling of rain-soaked leaves. Inside the house Blue turned in a circle or two and settled down by the rock fireplace with his chin on his paws. While he snored, I’d stay up late with my dad. We talked of books we’d read—he favored mysteries—and the azaleas he hybridized in the basement. Those nights, Blue sighing and shifting his weight and falling to snoring again, my dad told timeworn stories I’d heard before and yet would never tire of.

The one where my brother-in-law, a former college football player, slipped on a patch of moss and fell with a holler. The one where Dad discovered a black tube in a loaf of store-bought bread. In response to his letter, the company had referred to a piece of burnt crust, nothing to worry about.

“It wasn’t no burnt crust.” My dad laughed—so often he was laughing—and shook his head. “We all know that.”

As Blue dreamed, his haunches, soft as a cotton quilt, twitched. The clock ticked past eleven o’clock. My dad would tell me which stocks were doing well and how much rain they’d had.

“That Davis is a good boy,” he’d say, referring to my son. At ten years old, twelve, fifteen. Such a good boy. So polite, so kind. On their outings together, Dad sometimes handed Davis a grocery store gift card and urged him to give it away to whoever needed it.

“Good night, Dad,” I’d say eventually. I always reached up to hug him—every time, I’m almost sure. I pray I did it every time. For certain Blue would stretch and give himself a big shake before following me down the hall.

One of the hardest things I’ve ever done: tell Melissa that our mom died. This past Christmas Eve, late enough to cause alarm, Melissa called me.

“EMT’s over at Dad and Melody’s,” she said. “Dad’s in sudden cardiac arrest.”

The prognosis sounded dire, the image one I couldn’t change with the press of a button.

The other hardest thing I’ve ever done: telling Davis that his Gramps died. We’d seen Dad not but a week earlier, made jokes about Santa while dropping off Christmas gifts, assured him his new sunglasses made him look younger. He was seventy-four-years-old, countless stories left untold.

That Christmas Eve night, past and present curved into one another the same way Blue rested, black nose nestled against furry paws. The texts that said, “Good morning, doll.” Clipped newspaper articles in the mail, his spiky handwriting scrawled on the envelope. Morning rides to middle school in his truck, him drinking coffee and calling out stocks for me to look up in the newspaper. Something he said during his last week: “We’d like to get up to see you guys more often.”

At sunrise Blue woke hungry and we stirred long enough to feed him. When we shuffled back to bed, never mind that the calendar showed Christmas, Blue followed. He checked on Davis, on me and Geoff, sniffing at our feet until satisfied that we seemed all right.

As we pieced together what had happened the previous night, I asked Melissa question after question. “Was he feeling sick? Why had he gone to bed early?”

“He didn’t,” my sister said. “Melody said he normally goes to bed around then.”

All those nights on our visits, I never meant to keep him up past his bedtime. And yet I knew I’d have done the same, stayed up as long as my kid would talk.

The day of my dad’s memorial service, a week after Christmas, we made the four-and-a-half hour drive home. In the backseat Blue stood on his hindlegs and stared out the window, anxious, until we passed his vet’s office. Satisfied that he wasn’t being dropped off, he relaxed and curled into a ball and we all forgot and smiled.

During our last text exchange, just hours before my dad passed away, I’d sent him a picture of Blue cuddled with a blanket.

“Me too,” my dad responded.

We gathered on a piece of land owned by Dad and Melody’s neighbors. Bundled in our winter coats we spoke words that could not bring my dad back and told stories that were merely scraps of the patchwork whole. Blue watched from our car. Silently I promised to get him soon, to take him for a walk. This, at least, was something I could do.

After Dad’s brothers and their families climbed the hill, heads bowed, back to their cars, after we walked Blue, my stepmother asked us to stop by the house. Without my dad it yawned empty. The logs in the fireplace crackled and hissed. We sat and talked of how the service had gone. Beside his recliner, the library book my dad had been reading lay splayed open, the mystery yet unsolved. I couldn’t not see it. My husband shifted in his seat. My son, at seventeen as much man as boy, brushed his hand against his flushed cheek.

Instead of settling in his normal spot, Blue roamed the house. With snorts and sneezes—a lot of noise for such a little dog—he patrolled the kitchen, dining room, and back to the den where we waited for someone who wouldn’t show up. Blue seemed to be looking too. Maybe he recalled the walks he’d taken with my dad, the paralyzing fear of coyotes on the ridge, the scent of catfish in the pond. Around and around he went, his ears alert as though listening for his name, for another story. The cats of my childhood had roamed until the golden gloaming turned to crystalline twilight, unaware of my mother’s death or my need for comfort. But Blue made his presence known. His brown eyes swam with confusion, the dizzying disorientation, we all felt and could neither name nor fix. Maybe there ought to be a word for this too, something bigger than distraction. A daughter calling out to her dad, her dog, anyone who might listen. Here, we’re right here. 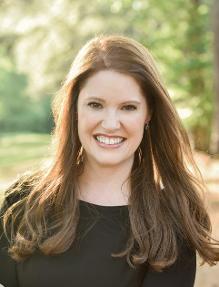 Heather Bell Adams is the author of the novels, Maranatha Road (West Virginia University Press 2017) and The Good Luck Stone (Haywire Books 2020). She is a recipient of the Rose Post Creative Nonfiction Award, Carrie McCray Literary Award, and James Still Fiction Prize. Her short fiction appears in The Thomas Wolfe Review, Atticus Review, The Petigru Review, Broad River Review, and other journals. Originally from Hendersonville, North Carolina, Heather lives in Raleigh where she works as a lawyer.