A feeling of hopelessness bubbles up in my chest. I can’t have anything nice. Ever. She must’ve seen something on my face because Joyce is looking at me like she just saw a car drive by a puddle and splash me head to toe in dirty rainwater.

“That’s okay,” Joyce replies, making a dismissive gesture. “You take them outside to pee while I get set up. Once we vacuum up, we’re gonna make a mix that’s half-water, half-vinegar, and we’ll let that soak, okay?”
I almost tear up again, and nod.
“Don’t take your shoes off, there’s some broken glass in the hall,” she tells me. “I also found these…”
There’s a glint in her cupped hand. When Joyce holds her hand out to me, I see the diamond studded silver hoops Becca got for me last Christmas. They are bent—chewed on—and a few of the diamonds were missing.
“They must’ve knocked over the dish on the hall table,” I say, staring dumbly at them. They’d been sitting in a glass candy dish my grandmother had owned. That was probably what shattered. “I’m going to have to inspect their shit for the rest of this week to try and find the stones. I can’t afford to get them fixed…”
A feeling of hopelessness bubbles up in my chest. I can’t have anything nice. Ever. She must’ve seen something on my face because Joyce is looking at me like she just saw a car drive by a puddle and splash me head to toe in dirty rainwater.
“Hey, it’ll be okay,” she replies, pulling her hand back to inspect them. “You know what, why don’t you let me hold onto them? My cousin’s a jeweler over at Calvin Boyles’, and I’ll see what I can do about getting you an estimate—and a discount. Sound good?”
I’m about to protest—at first it sounds like she’s saying all of this too nicely, like I’m one of her kids—but when I look up, all I see is her sympathetic expression. Her kind eyes. “Yeah… sounds good.”

The dogs are almost angelic after that, and I find myself surprised and grateful they behave. A month of relative peace. Until I see the turkey.
One of the bastard turkeys from the woods had gotten into the backyard. The glass sliding door was right near their crates, so the bird must’ve driven them insane. Somehow, they escaped. They must’ve unlatched and opened the sliding door, because the whirlwind of brown and black feathers and spattering of gore near the grill was no longer a living turkey.
Instead, I see five toothy grins around bloodstained muzzles. The dogs are covered in gore, especially Sloppy Joe, who lives up to his name now more than ever. Realizing that it’s going to take hours to clean this up hits me like a brick. Every single one of them needs a bath.
I start crying even before I know what I’m doing, or looking at, really. My vision becomes blurry, and I just sob like a baby in the sharp fall air. I don’t know what to do anymore. I don’t even move away when a few of the dogs come up to me, prancing with excitement, and nose at my pantlegs with wet red snouts. They are wild beasts who love me and will paint me red with excitement.
My phone is out of my pocket and I’m going to my text messages, pausing and squinting to be sure I have the right conversation before I text Joyce, my vision blurred through tears.
“Are you around?”
I hesitate, then add a follow up text: “It’s kind of an emergency with the dogs.”
Just the thought of cleanup makes me cry even harder. I don’t want to hose down five dogs. I don’t want to shovel a turkey carcass and feathers into a big trash bag. When I look down at all five of them, crowding around to greet me with bloody noses, I put my fist in front of my mouth to be quieter. I don’t want to hose down five dogs and throw away my pants, too. Intermittent dark streaks decorate around the calves and knees.
The phone buzzes in my hand while I stare down at it. Joyce replies: “What’s wrong? On my way! over.
*On my way over.”
She always sends corrections for her phone’s autocorrect, and for half a second, I want to laugh. Joyce would correct a text about an emergency.
I tug at one of the little hoop earrings I wore to school. I’ve worn them just about every day since Joyce brought them back to me, whole, in new hoops, with the stones replaced. She didn’t listen to a word of me paying her back.
“What the fuck am I going to do?” I give a half-laugh and look back down. The dogs all wag their tails. 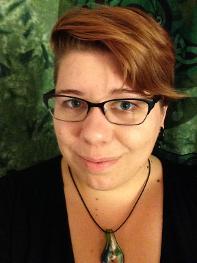 A queer author from Pittsburgh, Pennsylvania, Haley Fedor's work has appeared or is forthcoming in Storm Cellar Quarterly, Guide to Kulchur Magazine, Literary Orphans, Typehouse Literary, and the anthologies Dispatches from Lesbian America (Bedazzled Ink Press) and Unbroken Circle: Stories of Diversity in the South (Bottom Dog Press). Haley lives and teaches in Louisiana after receiving her Ph.D. from the University of Louisiana at Lafayette.