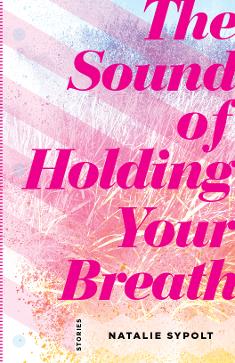 Ghosts haunt the pages of Natalie Sypolt’s debut collection of stories, The Sound of Holding Your Breath. The ghosts take the shape of dead friends and classmates, mothers and husbands and brothers. They are the ghosts of the characters’ past selves, wounded and often ravenous, lingering in the churches and trailers and diners of small West Virginia towns. Through fourteen stories, Sypolt’s prose never falters, subtle and steady as she unfolds a world that is both gritty and tenderhearted. It is a world aching with secrets. And sometimes the ghosts talk back.

Ghosts and secrets are inevitable in stories that center around family, as many of Sypolt’s stories do. The families here brace for storms, the ones darkening the horizon, and the ones that have already thundered through. In “Lettuce,” the narrator watches her husband, Matt, a war veteran and amputee, protect their garden from impending rain. “Some wives,” she says, “would run out, grab an umbrella, or a pot or something. I stand and watch, wondering how long it will take him to give in.” She grates carrots and helps Matt peel off his wet clothes, the question of when he will give in reverberating against the walls of the story like hail. The unspoken pain and desire between the young couple charges the story, conflict stacked upon conflict, bloody carrots to prosthetic arm, until they retreat to a routine dinner, the storm still banging against their house. Matt may have lost his arm, but both of them are wholly changed by that loss.

Other stories in the collection echo similar patterns of families consumed by tragedy. These are the stories with the loudest ghosts. The protagonist of “Wanting Baby,” Leigh, is a pregnant widow who visits her dead husband’s large family on Thanksgiving. Leigh is “the girl with no family at all,” hoping to forge a lasting bond with the people who loved her husband as much as she loved him, people who knew him longer. His pictures hang on the walls and his name, Trist, is fresh with mourning no matter how many times the family says it.  As she rests in her husband’s childhood bed, Baby kicking and punching her from the inside, she dreams of raising her child in that house, Trist’s family wrapped around them. In the end, her husband and the baby are the missing piece the family longs to hold onto, not Leigh. The rejection is subtle and inevitable. Sypolt’s masterful ability to weave heartache through the fabric of the story, thread by thread, echoes long after the story has ended.

She is rough-edged, tied to her surroundings, and loyal to her family. She has her own stories, even if they never make it to the page.

Ghosts also characterize the other stories in more violent ways. In the title story, “The Sound of Holding Your Breath,” rape, and the aftermath of that trauma, sparks an almost unnerving tension among the characters. Some pain can only simmer so long before boiling over. Some damage can’t be undone. In “At the Lake,” the narrator remembers his family’s last trip to the lake, a trip that ended in mystery and tragedy as his brother’s girlfriend, Carrie, disappeared. The narrator stretches his memory to see, as an adult, what he couldn’t see as a child: his brother Ben’s inclination towards abuse, Carrie’s fear and loyalty, and his parents’ blindness to the simmering tension between the characters. The narrator is left haunted by what he remembers as he watches his own children play and fight at the same lake. His daughter runs towards the water, innocent of what may lie beneath: “She is leaving a trail of ghost girls behind her. I blink but the girls are still there, pale and wearing blue swimsuits, girls that were afraid to jump into the water.” The family never speaks about what happened all those years ago, which is part of what makes Sypolt’s families so realistic. This is what happens in so many homes; the wounds scab over until they scar. Scars hold more secrets than unmarked skin.

In every story, Sypolt hints at darker secrets and leaves lasting bruises on her characters’ skin, grease and blood under their fingernails. This is most apparent in “Stalking the White Deer,” the final story in the collection. A woman looks back to the time before she gave birth to twins, when her husband, wounded in his own ways, became obsessed with hunting a beautiful white deer near their home. She takes note of her husband’s almost unbearable obsession and makes the decision to help him in the only way she knows how. In some ways, the image of a hugely pregnant woman in the snow, rifle over her shoulder, encapsulates so many of the women in these stories. She is rough-edged, tied to her surroundings, and loyal to her family. She has her own stories, even if they never make it to the page. “Those were my burdens to carry, though, and I’d do it gladly if it meant my husband was fixed,” the narrator says. “What I did not know then, could not know, was that a human cannot be fixed.” No truer statement could be made about the characters in The Sound of Holding Your Breath. They carry the heaviest of burdens and they long for a reprieve.

In “Ghosts,” an aptly named story told in three parts, a dead boy tells his own blurry version of the end of his life, while other characters, both directly and indirectly impacted by his death, attempt to understand. The boy isn’t just remembering his death, though; he is crying out to be seen and remembered. Perhaps he will be remembered among the “ghosts of West Virginia,” or maybe he will linger, watching the world go on without him. His friends will go to the Golden Egg, a diner featured in several stories, and they will walk across the same bridge where he died. He is part of the town now, tragically more memorable in death than he was in his life. Given the linked settings in this collection, the town of Warm, West Virginia, the reader can easily see how the ghost of one story similarly haunts the others.

In The Sound of Holding Your Breath, from crime scene to high school, crowded kitchen to snowy holler, Natalie Sypolt gives a voice to those who hold past traumas and future mistakes close to their chest. With affection and reverence, Sypolt honors the connections between her characters and their world with the care they deserve.

Penny Zang is a writer and teacher, working in Greenville, South Carolina, where she lives with her husband and son. Her work has appeared in publications such as the Potomac Review, Pank, Iron Horse Literary Review, and New Ohio Review. She is currently working on her first novel.

Read all of Still: The Journal's past reviews.