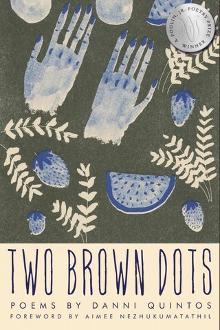 Two Brown Dots by Danni Quintos is a memoir in poetry, a tribute to brown-skinned Filipino immigrants and their descendants. Selected by Aimee Nezhukumatathil as the winner of the A. Poulin, Jr. Poetry Prize, Two Brown Dots is Quintos’s debut full-length collection. I was deeply moved by the stories of the characters and felt privileged to be afforded a glimpse into the various chapters of the main character’s life.

In the first section, “Girlhood,” the reader encounters losses of family stability in childhood and adolescence, growing up and coming of age in an environment with overt and covert racism. Quintos exposes the heartbreaking cruelty of teachers and playmates placing the character in a disadvantaged position in the classroom or at the playground. In “The Rules” Quintos also points a finger to the source of a playmate’s attitude:

You and Tommy look dirty, she says, repeating
what her dad tells her. Jennifer is allowed to play

with Yolie and have her sleep over and everything,
even though Yolie is from Cuba and has a strong accent

and I grew up here and have no accent. It’s because
Yolie is pale as Jennifer and Cara and our teacher

The title of the collection, Two Brown Dots, comes from the poem “Boobs,” but also refers to the two sisters who grow up in a complicated family dynamic. This theme of belonging starts at the beginning of the book and is revisited throughout. In “Brown Girls,” for instance, Quintos writes:

. . . And every summer after, a whirring

reminder that I don’t belong here, a little song
sung at me by the bodies that slept for years

underground. How we couldn’t see what he saw:
two brown girls under a white couple’s roof.

The second section is titled “Motherhood” and opens with the list poem “Trying” where the poet details the repeated efforts of the main character to get pregnant. The tone of the poem is subdued, and all emotion is contained in the repeated exclamation “O;” however, this powerfully conveys a grueling journey of hope and disappointment.

Echoing the collection’s title, breasts are referred to on multiple occasions: Waiting for them to appear, getting accustomed to having them, breastfeeding, but also dealing with breast lumps and exams, as well as stories of mastectomy and reconstructive surgery for close relatives. Breasts are emblems that both support life but also become potential threats to life, as seen in the poem “Breast Lump”:

shoved into my numb & unsuspecting
breast. . . .

. . . Praise too my grandmother’s
missing breast. The one replaced by

an intersection scar, her many biopsies,
her casual dismissal of mine while she lay

in a hospital bed, tubes in her arm, true
crime on TV.

Each of these multigenerational experiences contributes to a rich narrative. The action effortlessly shifts between the USA and the Philippines via the stories of ancestors and descendants. Filipino history has been highlighted through letters to Imelda Marcos and exceptions to an elementary school textbook.

In the poem “Five Hundred Years & Three Weeks Ago We Killed Magellan” the speaker gives voice to the feelings of her former third-grader self who at the time “didn’t yet know how to correct a teacher”:

. . . I know now
that Lapu-Lapu, the first Asian to resist
colonizers in history, stands 50 feet tall
in the capital city of Manila, holding

the kampilan, a weapon at rest. He looms:
symbol of our resistance & distrust,
reminder that we stand on legs
like immovable trees, rooted & ready.

It is difficult to feel at home in a country that assumes you’re a foreigner, a country that others you in numerous subtle and overt ways. To me, one of the most poignant issues raised on multiple occasions throughout Two Brown Dots is the widespread assumption by “pale” Americans that brown-skinned people are recent immigrants who were not born and raised in the USA.

“Letters to Imelda Marcos” draw both parallels and contrasts between the infamous dictator and the speaker’s grandmother. In this way Quintos juxtaposes the social disparities in the Philippines, and also reveals the prevailing attitudes towards women and some of their common plights. This multipart poem serves as a vehicle to provide an origin story and to fill in poignant family history details in addition to exposing the crimes committed by dictators, endowed with unchecked power.
The occasional code switching between English and Filipino underscores the authenticity of the work, giving it the intimate feel of conversations between people who belong to multiple cultures and have the luxury of selecting the exact words from a wider set of languages.
I was especially moved by the intensely sarcastic poems in “Folklore” the third section of this collection. It is difficult to feel at home in a country that assumes you’re a foreigner, a country that others you in numerous subtle and overt ways. To me, one of the most poignant issues raised on multiple occasions throughout Two Brown Dots is the widespread assumption by “pale” Americans that brown-skinned people are recent immigrants who were not born and raised in the USA. From the poem “Your English is Good”:

they spoke slow & loud, then

impressed, they complimented my good

And from the poem “Self Portrait as a Manananggal”: “They ask me where I’m from & the answer is hundreds of years old. . . . Where are you really from? . . .  I fill in the bubble marked Other. . . .”
It is time for us to stop othering people, and books like Two Brown Dots are touchstones toward recognizing the depth and the cost of the problem. Quintos’s poems highlight that in reality we don’t sink into a melting pot to emerge into a homogenous mass, but rather contribute through the specificity of our heritage, history, and personal victories.
Two Brown Dots by Danni Quintos is a book worth reading. I recommend it not only for what it stands for, but also for the author’s meticulous attention to craft and the beautiful execution by BOA Editions. 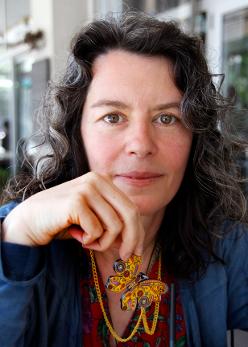 Katerina Stoykova is the author of several award-winning poetry books in English and Bulgarian, as well as the Senior Editor of Accents Publishing, where she has selected, edited, and published over 80 poetry collections. Her latest book, Second Skin (ICU, 2018, Bulgarian) received the Vanya Konstantinova biannual national poetry award, as well as a grant from the European Commission's program Creative Europe for translation and publication in English. Katerina acted in the lead roles for the independent feature films Proud Citizen and Fort Maria, both directed by Thom Southerland. Her poems have been translated into German, Spanish, Ukrainian, Bangla, and Farsi. A volume of her selected poems, translated into Arabic by acclaimed poet Khairi Hamdan, is forthcoming from Dar Al Biruni press.

Read all of Still: The Journal's past reviews