Savannah Sipple on Michael Klein's poetry collection
When I Was a Twin
Sibling Rivalry Press, 2015 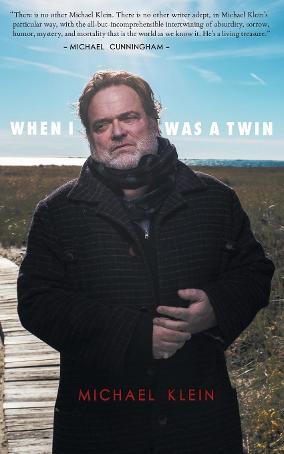 Michael Klein’s most recent collection of poetry, When I Was a Twin, is a long walk through grief and observation toward a state of existence that does not include his twin brother, Kevin. The structure of the poems, with many of them in long, prosaic lines, speaks to the struggle we often find ourselves in as we wind our way out of grief and loss. But don’t let the structure turn you off. As much as Klein is mourning the death of his brother, he is also battling the realization that he could just as easily have been the twin who died: both brothers were alcoholics; one found sobriety and one didn’t. Each poem presents keen observations on the demons we each face and the ways in which we cope.

The very first poem is titled “Harmonium,” which echoes Wallace Stevens’ first collection by the same name. This is homage to Stevens, but also a fitting first poem because it sets the philosophical tone for the entire collection. Klein observes and reports in a way that dives into the metaphysical while also keeping the reader grounded. For example, “Harmonium” begins:

and can’t change clothes in either locker room.

She’s between two rooms of time. And the country is different

but the same—everything we talked about. Nothing really changes

except extent. But there’s a lot more death since you died.

Klein presents a scene and through the first few lines, the camera shifts for us to see Bruce subtly change to Sheila. Klein doesn’t even have to describe the physical person for us to see the shift; it’s represented in the fact that she can’t change clothes in the locker room. Then he throws in the line “She’s between two rooms of time,” and suddenly the camera has zoomed out. There’s the literal scene of a body standing between two doors, but what makes that line resonate is most everyone has felt suspended at one point or another. The rest of the stanza reiterates the feeling for us. The focus shifts from Sheila to the bigger picture of the country: the same, but different. Nothing changes. These aren’t totally new ideas, “except extent. But there’s a lot more death since you died.” The chord has been struck and the tone is set. Klein’s ability to include brief statements that create a shift in his poems, shifts in scene and shifts away from or closer to the physical body, are what hook the reader. They also work to balance the prose structure of many of the poems.

The prosaic structure of these poems demonstrates the subject matter; the prose poems primarily focus on a grief of some sort, most often a grief related to the loss of his brother. Perhaps the form speaks to the way we experience grief: deep and long with a few moments of clarity before the emotion itself takes back over. “The title poem, “When I Was a Twin,” is one of the most poignant of the prose poems in the collection. In it, Klein weaves his way through the loss of his brother. The poem is written much like a braided essay and there are brief moments of clarity that intersect the walk. Early in the poem there’s a section set aside that reads:

I didn’t voice it plain. The survivor thought kept coming and

going in my living and in my writing.

than I could feel him in our living.

Here Klein exhibits an honesty that many might not realize or admit to having. He pinpoints what kept him from being the brother that died: his mentality. In a life where two people are so similar in so many ways, something so basic and intrinsic is what separates them. This realization is what drives the grief Klein experiences through the entire collection.

In the rest of this poem, Klein creates shift using single sentences between longer conjectures, a technique used my some of the best memoirists. These shorter sentences create breath. After a long stanza of discussing his memoir and deciding to write about his sexual experiences with his brother, Klein finally admits: “I needed permission from my brother to tell on him.” That premise feels so counterintuitive to anyone who has siblings or anyone who has decided to write about actual experiences. We often tend to commit and act and ask permission later. Klein, though, acknowledges that obtaining his brother’s permission is what freed him to be most honest. The poem ends on what seems to be an obvious statement, but is one that carries significant weight:

Richard, my ex, called soon after Kevin’s death to tell me—

as though it were important somehow to know—that it felt

as though a piece of me had died—not all of me, just a piece.

(Which piece, I wonder?) And for every twin whose twin is dead,

there must be the nagging—or is it misplaced?—grief of not

being absolutely sure who to grieve, which of the two had, in

fact, died? But I was sure. Kevin was dead. I was alive.

When I was a twin Kevin was alive.

These lines add more layers to the grief. Of all the things Klein considers, the realization that he is now an independent entity is the one that weighs him and the reader down. Why is that? Throughout this poem, and others in the collection, we start to see that being a twin was, in many ways, a burden.

" . . . and all I could offer was my dog as representative

for love. Here I am. Here is what I love: something that comes
to his own name."

The longer poems in the collection, long in line length and page length, are balanced by what we might consider more “traditional” poems, in terms of shorter, more deliberate line breaks. These poems work to indicate shifts and movement through the grief. They move toward a kind of peace. They also tend to focus less on the brother and more on love. Many poems throughout the collection, regardless of structure, address queer issues and queer love, but poems like “Pentimento” work to highlight that love in a way the longer poems often do not.

“Pentimento” is an observation on love and an address to a former love. It begins:

And there you were again after all these years

talking about yourself—still wanting to be seen

for who you were under your own portrait

and all I could offer was my dog as representative

for love. Here I am. Here is what I love: something that comes

to his own name.

Pentimento is a painting term that refers to the moment when former images in a painting, that have been altered or painted over, begin to reappear. It’s a perfect title for the moment it captures. Klein says, “suddenly, your face / took on the shape of someone else I couldn’t remember” and ends with the lines:

…and then it was you

again in your thicket of sentences looking at me listening

looking exactly like yourself and the version of yourself

emerged out from under yourself. I almost had his name. And yours.

Read this beautiful collection and decide for yourself.

Savannah Sipple is a writer from eastern Kentucky. Her essay "Like it Never Happened..." was published on Quaint Magazine's blog and was featured as one of 2015's Transformative Literary Essays by Sundress Publications. Savannah's poems and short stories have recently been published in Appalachian Heritage, The Pikeville Review, Southern Indiana Review, Still: The Journal, and in the anthology Appalachia Now: Short Stories of Contemporary Appalachia. She is also a writer and co-creator at Structure and Style.