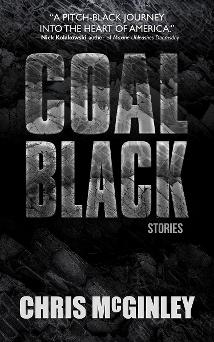 Chris McGinley’s Coal Black is a startling short story collection—part noir, part stories of ghosts and lost souls, and part evocation of an Appalachia we know exists but might never want to see. The place names are familiar: Hadley County; Caudill Mountain; Red Thrush Mountain. The stories take us deep into an Appalachia we think we recognize: past an old coal tipple and into dense trees rising on a hillside. Then circumstances become more uneasy. A red tail hawk circles. Timber rattlers hiss. And in the midst of chestnuts and sycamores, slipper elm and sphagnum moss, the characters are left seeking a new kind of supplication. Oxycontin. China Girl. A pull on a bottle of Early Times for courage.

Chris McGinley’s short stories have appeared in a variety of journals including Mystery Tribune, Mystery Weekly, Retreats from Oblivion, and Tough, and he is at work on a crime novella called Once These Hills, about the extractive timber industry and its effects in a little mountain community. He is a crime writer, and he draws much of his creative power—and his love of eeriness—from the work of the American Romantic tradition of Hawthorne and Melville. But as he says in an interview in Shotgun Honey, he has long sought inspiration for his work, though he is not from the region itself, via the stories told and heard in Appalachia. The question of writing about a place one is not from lingers as we read these stories, but McGinley takes on this question as he describes his history as a writer. Like solving a good mystery, he has read and researched, seeking information from the Appalachian Regional Commission and from careful study of writers from the mountains: Janice Holt Giles; Wilma Dykeman; John Ehle.

While he grew up middle-class, with access to education and employment opportunities not involving corporate exploitation and the cycles of poverty that plague large segments of the mountains, those stories and those people interest him.

The stories in Coal Black begin with crimes and repercussions. At Sheriff Shelby Hines’s office, it’s “open season on users and addicts,” and Hines goes in search of Hellbender, a small-time dealer who has become the opioid king on Black Owl Mountain. “The Quilt” begins with Royal and Reely, two addicts looking for an easy house to break into up on a hill in a place called Hot Fork. Other stories are about missing women. They’re about contraband ginseng and slippery elm bark and rattle snakes. They’re about stealing copper wire to resale, ripping off convenience stores, trapping bears via trespass and off season. As stories of crimes and repercussions, they function well—but it’s their deeply specific details and incisive characterizations that make them outstanding. “Hellbender” takes us inside a hot and suffocating trailer rife with the smell of death, a beach towel stretched over a window. McGinley’s stories want to know who the people are who live behind the words. He wants to know what made them, and why.

. . . It reaches far inside—inside the mountains, inside trailers with their La-Z-Boys and TV trays and vials of prescription drugs, inside lost characters looking for new ways to live—and asks us not just what the cause of crime and addiction is, but where the question of who we are came from in the first place. Not satisfied with questions about the cycle of poverty, crime, and addiction, McGinley pulls back the noir curtain to reveal other kinds of mystery altogether. 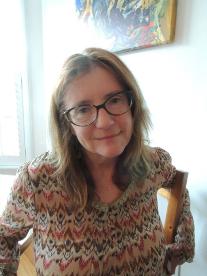 Karen Salyer McElmurray is the creative nonfiction editor for Still: The Journal. A novelist and essayist, her latest collection is Voice Lessons from Iris Press (2021). She has published three novels and a memoir.