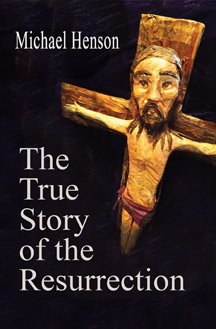 In The True Story of the Resurrection, Michael Henson re-imagines Genesis, Jeremiah, and Jesus. This imagining is not the benign fancy of a Disney. It seeks after that defined by Coleridge: “a repetition in the finite mind of the eternal act of creation.” Such imagination can be dangerous, and at the risk of falling into the intentional fallacy, I think Henson declares his will to be dangerous in his “Introduction and Fair Warning:”

This book does include poems that enter into arguments I have with some people who call themselves Christians and how they read the Bible . . . [and] a long-standing argument I have had with God.

As Job can tell us no one wins an argument with God.

But as God tells Job, we win His blessing when we try.

Henson divides his argument with Christians and God into five parts, in roughly the same order as we find them in the Christian Bible: “The Old Testament,” “The New Testament,” “Epistles,” “Revelation,” and “Fragments, Apocrypha, Midrash and Commentary.” By far the most space is given to the Testaments, beginning with the obvious, Genesis.

Henson’s “Genesis” re-creates the Creation and in so doing gives a little nod to evolution and puts a slight twist to John’s statement “In the beginning was the Word.” When God mixes spit and clay the result is not Adam, but “all manner of slithering things” that quarrel and multiply and grow until

God, watching “from his god-place,” takes only indirect action:

The Word and the words are a recurring motif. “Genesis” describes both the Bible and this book: honey in the mouth, bitter in the belly.

These are poems saved from preachiness by a constantly surprising mix of compassion and wit. A dark playfulness is at work here. The text is the Bible, but the subtext is the failings of contemporary religion and politics.

In Singing School, Robert Pinsky speaks of the poetic line as a “means of performing energy and balance.” Henson combines an energetic line with lively invention. These are poems saved from preachiness by a constantly surprising mix of compassion and wit. A dark playfulness is at work here. The text is the Bible, but the subtext is the failings of contemporary religion and politics. The subtext, however, is so blatant that the labels could be reversed, as indicated by titles such as “The Short Attention Span Gospel” and “To Tom McGrath in Heaven: a Letter from the Ark.”

In the latter, it is not water that floods the earth and destroys human kind but dollars. “Lot’s Wife” flees with her children from what might be any of the current constant wars wherein “the little guns spoke / and the big guns answered.” “The Woman at the Well” is a homeless wino; homeless also, in “The Foxes Have Holes . . .,” the Son of Man, turned out barefoot in the snow for an infraction that is never explained to Him. The Epistles of St. Michael are written to the marginal and the many, the poets and the Friends. In the “Revelation,” Jesus meets Jesus on the Plains of Armageddon, in a poem that reminds me of Melville’s The Confidence Man. Which avatar of Jesus is Christ and which Antichrist? Perhaps either is both.  Like the speaker of the poem, we are left “Anxious, unsettled” to “[wait] for His word.”

The story of the “Exodus” is told by a mother grieving for the collateral damage caused by the flight from Egypt and the claiming of the Promised Land. “I sit uneasy in this land,” she says

The men have their books and their laws
so they know that all is right.
But beneath every law is a pile of skulls.
And the words in each book are nothing but air.
We rest upon the corpses of those we have despoiled.
And their children serve us as we served Pharaoh.
And is this not a curse?

The title poem, “The True Story of the Resurrection,” begins when a mysterious “they” steal the body from the tomb because “It was too hot a property to leave to rot.” “

. . . in an abandoned K-Mart,
they assembled a crew of cosmetologists,
kinetic specialists,
biblical scholars,
and some very sharp marketing minds,
and performed,
in total secrecy,
the most stunning makeover of all time.

The Jesus these handlers create is the very model of a modern television evangelist or a charismatic demagogue “persuading” the masses “into dutiful submission.” But even this automaton Savior keeps getting off message, keeps wandering away with “that look in his eye . . . that wild sadness” to hang out with the homeless or the workers. So the handlers build a new cross.  “Again. And again.”

I am completely won over by these poems. They are a delight to read aloud, and in fact, the first time I read this book, I read every poem in it out loud to whomever I could get to sit still and listen.

Their cadences are very much those of the Old Testament: the anaphora, the lists, the parallel constructions (“their children serve us as we served Pharaoh”), the images and oppositions (honey in the mouth, bitter in the belly) are the language of the King James with some Whitman thrown in for good measure. Comparison to Hopkins or Herbert might seem obvious but I am reminded more of the satires of Dryden, Pope, and Swift, men with a strong sense of righteousness. Henson, himself, invokes Yeats, and I detect the influence of Frost in Henson’s use of mimetic sound, as for example, in the end of “The Foxes Have Holes  . . .”

and there was no sound in the empty street
but the tish, tish of snow on snow

Or from “Jeremiah in the DR”

watch the children play
in the chicken-scratch yards

Hear those chickens scratching in the ch, ch, ch. Hear the alliteration, the small explosions of the plosives b, g, k, the puffing w sounds, and hear slow heavy steps on the boardwalk

Those old white men walk the beaches
With the confident, broad-belly, broad gait walk
of men who own whatever world they enter.

The result is a rich language that Henson pushes to the edge of excess. He does not fall but in a few instances he teeters. In this passage, for example, the suspension of disbelief slips a bit:

They are lovely, the young brown girls,
with their ravenwing hair
and their merenge eyes
and their hips that speak like the sea.
. . . their avocado breasts?
. . . the cliffs of their brows?

I find it a bit difficult to put this girl together, but this poem is a jeremiad after all, a form given to excess, so perhaps excess is called for.

But this collection raises larger questions. In Per Amica Silentia Lunae, William Butler Yeats said “We make out of the quarrel with others, rhetoric, but of the quarrel with ourselves, poetry.” What does Henson make of his quarrel with God? Will these poems, like Yeats’s “Easter 1916,” outlive the historical moment? Or are they expressing what Frost would call a grievance, not a grief?

In his “New Testament,” the impending birth of Christ is treated in a 12-part mini epic called “Christmas Eve, 2001.” These lines from the 12th part, “And in the Morning”

We cannot know what marches
toward the hard new Bethlehems
and I fear for those I love
and all who fall into the path
of the pinstripe Herods.
But the old story tells us
compassion survives
in the mangers of the poor.

Henson, in his introduction, warns us that some people may find his poems disturbing. “I understand this,” he continues, “I was disturbed myself when I wrote them.” Always Henson gives his allegiance to those outcast and poor. Always he eschews “the pinstripe Herods.”

Yeats also says that faith is the only gift we can give God. These poems are akin to Job’s lament, an outcrying to God from a man whose faith is sorely tested.

Sherry Chandler, winner of the Gabehart Prize and twice nominated for a Pushcart, is the author of two collections of poetry, The Woodcarver's Wife and Weaving a New Eden. Her reviews have been published in Rattle, Smartish Pace, Rain Taxi, and forthcoming in Calyx.
She lives on a small farm in Kentucky.