Rain drummed, then tapped all night, before changing to snow.

Around dawn, limbs popped like gunshots and, three days later,

I was thirty feet up a curly willow, looking down on houses

gutter to gutter. Salt-melt in the alley. Across the street,

two mechanics twisting stubs into a sand-filled coffee can and,

fingers numbing, I had no inkling of the body-doubling pain

that would force me down the ladder, into the emergency room—

to a doc-in-the-box because it had to be cheaper, then back

to the emergency room because, by then, I could hardly stand.

and two bouts of chemo, folks look at me like I ought to know something.

I go for short hikes or, sometimes, just sit in the kitchen glassing birds.

This satisfies the majority.  Others nod, though, wanting more. So, once,

I told this one: last week a friend took me to the state park. Blackwater.

You know.  To the cliff overlook. We walk past the slot binoculars

and onto a rock slab jutting like a ship’s prow above the canyon.

Downriver, dark water like a black thread stitched through green.

I squat, edge toward the rock’s lip, then swing my legs into the void.

What happened? they ask. Arms prickling, I see, again, the vulture rising

updraft like a kite. Nothing, I say. You should try it.

*
High Lonesome Blue
For generations our lives were barely visible
beneath the leaves—a ceaseless green whisper
or a ridgetop’s bent refrain, the soundtrack
of our days.  That music, like the weather,
has changed. Up the car-lined street another
chainsaw drowns my heart’s steady beat.
The sidewalk’s buckled. I don’t have time for leaves.
So—though in health, not sickness—a hundred suns
fall in a single afternoon: each ring a green promise
broken, a silent zero that kept on counting even
as the wheels’ white noise—of log trucks and leaf-
peepers headed for the mountains—grew into a dirge.
That’s why I don’t go until the canopy falls,
fire roads close, and you need skis or snowshoes
to pole your way to the spruce-line.
Above the blood’s heavy tattoo, you hear it—
how branches and wind make cradlesongs
of the high and lonesome blue.
*
The Wasp

Like green willows cut back, then cut
again, the surgeon’s scalpel removes each
season’s stubborn new growth, stunted
by poisonous drip. I zombie to work
and back, yet live, and in living, love
and grieve all those who came before,
who risked and lost—pounds of flesh
and good-time friends, and that one
last hope, before the end.  I can’t call it
a win—what they’ve given. Time.
To scrutinize eternity—as carefully
as this wasp perched on the rounded
hill of my erasure.  Forced out the vent
by the first furnace blast of the year,
she makes one tiny-footed, antennae-
twitching rotation, before flying
toward the arched forest of golden
fern just outside the window.
Trapped, she bumps from glass
to glass, seeking late autumn light.
Though frost soon rimes the grass,
and I’ve little energy to muster,
I offer the sugared lip of my coffee
cup and walk her out the door. 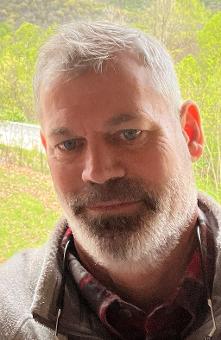 Bill King grew up in the Blue Ridge Mountains of southwestern Virginia. He is the 2021 Heartwood Poetry Prize winner and a Pushcart Prize nominee. His work has appeared or is forthcoming in Kestrel, Appalachian Review, What Things Cost: an anthology for the people (University of Kentucky Press), 100 Word Story, Naugatuck River Review, and many other journals and anthologies. He holds an M.A. in Creative Writing and a Ph.D. in Literature from the University of Georgia and teaches creative writing and literature at Davis & Elkins College in Elkins, West Virginia. His chapbook, from Finishing Line Press, is The Letting Go (2018).  His first full-length poetry collection, Bloodroot, will be released in 2023 (Mercer University Press).